I was driving in my car yesterday morning and a commercial came on the radio: “Today, we are two days away from Palm Sunday. Have you ever wondered what Jesus was doing on the Friday before Palm Sunday?”
Okay, I thought. You have my attention.
We’re under a week out from the crucifixion at this point, the voice proclaimed and I was curious. What was He doing on the Friday before Palm Sunday?
According to the scriptures, this was the day that Jesus went to visit with Mary, Martha, and Lazarus (the man He

rose from the dead). This is also the day that Mary broke the jar of the really expensive perfume and poured it over Jesus’s head, and proceeded to wash His feet with her tears and hair. When she did this, the disciples kind of jumped on her case – that perfume was worth a years salary (just imagine owning something that expensive, that it cost a years worth of your salary), and in their opinion, could have been sold for money and the money given to the poor. But Jesus silenced them by saying that she had given Him this offering and she’d really blessed Him. He knew He was being prepared for burial, in a sense.
The commercial’s point was that Jesus was surrounded by His friends and spending time with those He loved and they were inviting listeners to join them for Palm Sunday. But I just kept mulling this idea over about the perfume she had offered over Him.
More than a few weeks ago, I heard two messages in a matter of days that talked about this particular event and I learned quite a bit about just how much of a sacrifice it was for Mary to do what she did.
See, Mary’s perfume wasn’t just something she’d picked up at a JCPenny’s or Macy’s. Mary had a jar of nard, and while it doesn’t sound beautiful, it’s supposed to be a very wonderful scent that fills the air, something you would smell across the room. And nard WAS expensive. Mary lived in the Middle East, and yet nard is derived from the Himalayan Mountains. For it to be bottled and transported over that kind of distance was very difficult 2,000 years ago, so you know it was quite the rare possession in their town. And because of that, someone would pay top dollar for it. With that much money, Mary could have survived a year or more – depending on her spending habits. Also, the way nard was jarred, it wasn’t like you could spray a little here and there. Once you broke that jar open, you used it all. It was a one time shot.
So imagine you make $40,000 a year. You have this perfume that can only be used ONCE that cost you $40,000. Would you pour it over Christ’s head? Would you offer that sacrifice to Him?
See in Hebrew 13:15, the Bible says, “Through Jesus, therefore, let us continually offer to God a sacrifice of praise–the fruit of lips that openly profess his name.” The term ‘sacrifice’ implies that something must be given up; it has to cost something. For Mary to give up that safety net, that precious and treasured bottle of nard that could have sustained her for a year if sold, was definitely a sacrifice. It certainly cost her, but she offered it up to bless Him, to praise Him. And when people judged her actions as something foolish, Jesus Himself came to her defense. 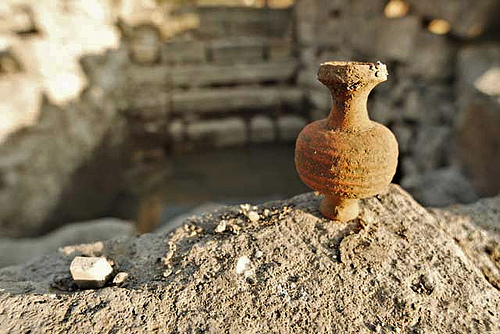 See, life gets hard sometimes – we all know it. Every once in a while, it’s like circumstances are stacked up against us. But no matter how bad it gets, no matter how difficult, He says to offer up a sacrifice of praise – let it COST you something! You know, I have definitely had moments where praise and worship HURT. My heart was breaking and I just sobbed; but my hands were lifted high just saying, “But God you deserve the glory because you work all things good for those who love You and are called according to Your purpose, You’ll take care of me, You’ll never forsake me, You have blessed me, Oh Lord, because You’ve saved me by the name of Jesus! This might hurt but I won’t stop.” And I could feel my praises fill the room for Him, just like scent of Mary’s perfume, as I’ve poured myself out to Him.
The most beautiful part though, is that once I emptied myself, once my jar was broken and the perfume and praise had been spilled, and I just sat there crying at His feet, He began to fill me with His joy and strength – and everything that was so painful to pour out wasn’t so painful at all. And His blessing found me there.
I firmly believe that God loves to hear the broken cry out to Him, but not because He rejoices in our pain. No, it’s because He knows that once we invite Him in, there’s nothing He cannot do for us. To Him, it’s like hearing His son or daughter’s voice for the first time after years of silence. He doesn’t care at that point what we’ve done or what trouble we’ve gotten ourselves into, He’s just so happy we’ve come to back to Him so He can protect us and heal us.
Like it says in Luke 15, God rejoices over us as a shepherd would rejoice after finding the one lost sheep. So if life is hard, offer up that crying painful sacrifice of praise. Pour yourself out like Mary poured out the perfume. Let your praise cost you something – and He will come to your defense. He will come to take care of you. He will fill you up again with something far more precious and enduring, which is His joy that is our strength (Psalm 28:7).