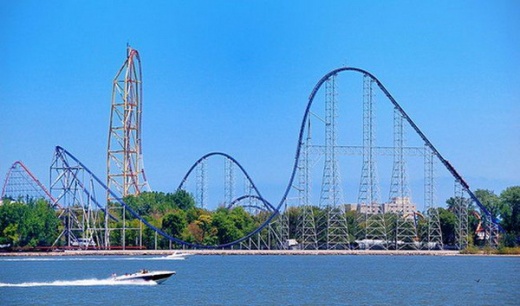 Do you know what that is?

If you said it’s the Millennium Force at Cedar Point in Sandusky, Ohio, well… you’re technically correct.
However, I look at it and can only see the last week of my life.

The Millennium Force features a 310 foot climb, a 300 foot drop at 80 degrees, three overbanked turns at up to 122 degrees and 160+ feet from the ground, a zero-gravity camelback hill, two tunnels, and a 360 degree helix – and all of this at rates of speed over 90mph, with the ride usually completing in under 2 minutes and 20 seconds.
The last week of my life has seen incredible highs, some pretty low valleys, and sharp turns. I’ve been nearly completely overturned, I’ve been in the dark, and I’ve been blinded by the light – and it’s all happened really fast and packed into about one week.

See where I’m coming from?

In the last week I have:
– finally completed everything that was the be.you.ty project and I can honestly say that fun was had by all involved, and we were so blessed, and it was an incredible success. 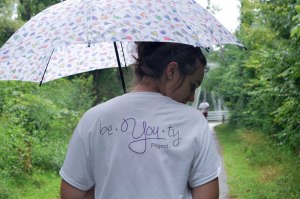 <
– spent the day with my boyfriend and my daughter at a county fair near home and had an AMAZING family day bonding with the two of them, as well as his parents.
– had a lovely day off, relaxing with a family I grew up with.
– struggled greatly to fight off the devil and keep my relationship pure.
– attempted to visit a nearby zoo that would have taken about 2 hours to reach, and visit a dear friend of mine who lives in that city, when our day was brought to a screeching halt by a 5 and a half-foot piece of angle iron that I was forced to run over in the highway, subsequently destroying the tires and rims (which are aluminum, I might add) on the passenger side of my car. Had to be towed to a Wal-Mart where my car could not be fixed, bought rims from a scrap yard, which also turned out to be bent, spend 6 hours stranded with a toddler over an hour away from home, and ultimately had to have my car towed back to my house anyway. Total cost: well over $600. 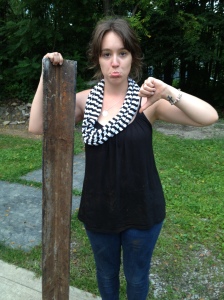 – witnessed the absolute love of my family in my hour of need^ My boyfriend took the bull by the horn when I had no clue what to do and provided the leadership that any good man should. My three-year old daughter spoke Godly truth into my life when she looked at me and said, “Don’t cry, mommy. God will take care of you. God and your friends will take care of you.” And boy, was she right. My mom left work at the drop of a dime and drove an hour to sit with us while we waited for a tow truck, drove us to the Wal-Mart (it’s not like we were putting a car seat in the tow truck haha), the scrap yard, and to a Steak-n-Shake for lunch. My dad found refurbished rims, and then he and step-mom also drove an hour in the truck with trailer in tow to bring my little car home. Beyond that, my dad also carried the brunt of my financial burden in the matter, knowing I couldn’t afford that kind of damage. The generosity and support I received was astounding. 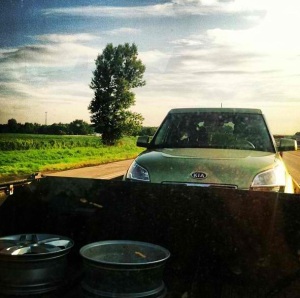 – took Monday through Wednesday off of work, and worked a full day on Thursday. When I came into work, before 9am, I got offered a promotion and a raise!
– celebrated both my own and my boyfriend’s birthdays, where both of our families and friends came out and had an amazing night with us, and just generally had an awesome time with everyone. It was especially a treat, because two sets of grandparents were there (and totally hit it off) as well as both sets of our divorced parents. We’ve been so blessed with a pretty darn awesome and drama-free, loving family and we just had a blast!
– had my heart ripped out. Saturday August 10th, my mom and I took my dog (and one of my very best friends) to the vets office. We’ve known of his having glaucoma for a few weeks now, and he’s been deaf for years. Having tried two treatment plans already that were unsuccessful, we knew what this was. At about a quarter after 8 in the morning, my mom and I held our Murphy’s head in our hands as he took his very last breath. We took him to my family’s farm, where my dad had prepared a spot for him, and we laid him to rest among great company, with every other dog our family has lost since my grandparents have had the farm. 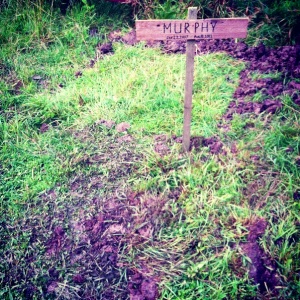 – spent an entire Saturday evening with my dad, step-mom, boyfriend, sister, her boyfriend, and my grandparents, celebrating 81 years of my amazing and saintly grandmother. She’s seriously the most amazing example of a Godly woman I’ve ever seen or known, and offers the most unconditional and genuine love I’ve ever experienced in this world. This was of course followed up by us getting into something, as usually happens on a farm, and we had an impromptu softball game in the field, that we had to maneuver around the horse turn-outs and gardens haha.
– allowed God to call me out of my comfort zone. I’ll keep this short and sweet because it’s a beast of a story, but I confronted someone with something I know God showed me for them and it blew up in my face and I’ve suffered 3 days of persecution and attack for it. (But God is faithful in all His promises, and this, too shall pass!).

Like I said… High highs, low lows, sharp turns, dark moments, and fast rates of speed. Some of these things were all in the same day!

Ahh! I literally told some friends that I really did not believe that my heart had caught up yet. The last week or two has been a whirlwind of ups and downs and literally has sent me on a roller coaster.
I honestly had to ask myself how I haven’t fallen apart yet, just from mere force alone.
And the answer is a simple one: I’m anchored in to my seat.

When you get on the Millennium Force, for safety purposes, there’s a seat belt and a pretty intense lap bar that comes down to lock your legs and bottom in the seat. It’s so sturdy, that you don’t even lift out of your seat on that 300 foot 80 degree drop, even at 90+ mph. You are solidly locked in. So you can have what would normally be a near-death experience, and not die, but have fun, because you trust that lap bar to protect your life.

Now, real life doesn’t exactly have a seat belt or a lap bar, but it does have the Lord and it does have the Bible. And because the JOY of the Lord is my strength, I can tough out the craziness and chaos with a good attitude. So even though some might have whiplash or just fall off the bandwagon with so much diversity in the emotions and events I’ve dealt with in the last week or so, God steps in and He says, “No. You will not fall out. You will not die. You’re going to, not just survive this ride, you’re going to have fun on it, because you know you can count on Me for safety.”

If there’s one thing I’ve learned about the Christian life, it’s that we have problems. Sometimes, we have really big ones. And we struggle, and cry, and pray our way through them with God and with each other. And sometimes, we have really amazing times, and we smile, and laugh, and praise our way through those. But ultimately, we aren’t shaken because we know there is a God in heaven who we can trust; a God who is holding us in and holding us together so that we can enjoy this crazy ride that is our life.

**Fun fact: the Millennium Force was a record-breaking coaster has been running for 13 years now; and with every major ride ranking entity, it has never dropped below second place for the best rides of its kind. Millions of people every year wait in line for up to 3+ hours to experience the thrill. What would happen if we anticipated our lives (even the chaotic parts) like the people standing in line for this epic coaster?