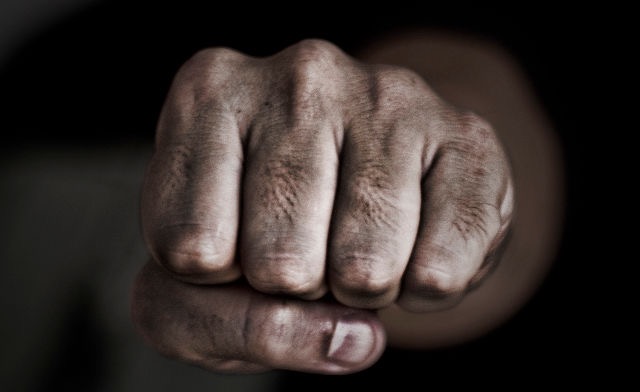 I remember the sound of my breath as it left my body the first time I was thrown into the ground, but I don’t remember the fear I felt anymore, as I was held by my throat with the weight of a man on chest and arms. I cannot recall the alarms that were undoubtedly ringing in my mind as I was pinned to the pantry door, again by my throat, or even the anger I felt as I, myself, swung violently at the man who had promised to love me.These moments and the others like them just play out like movies in my mind, a part of my history that happened, but doesn’t hurt me anymore. The emotions have faded over time, but I carry them and remember them, because overcoming them is a part of who I am today.

What I haven’t lost to time and healing is the empowerment and courage that was given to me when I finally reached the end of my rope and asked for help.

More than five years ago, before I gave my life to Christ, I was in a relationship that was mutually emotionally abusive and after eight or nine months of betrayal and lies, I’d finally had enough. I learned that the guy I was with had spent an hour on the phone the previous night with his ex-girlfriend, who I’d suspected he’d already cheated on me with more than once, and the emotions I felt were too much to handle. So I pushed him. And I pushed him again. And I cried and I screamed at him for betraying me again. The situation escalated so quickly, it’s a blur to me to this day. I can’t tell you what lead to his hand on my throat, just that it ended up there.

Within a month or so, I attended my first personal self-defense class, and a few weeks in, I approached my teacher to ask the question that was burning a hole in my pocket. “Will we be learning how to get out of choke holds?” That’s the feeling I remember. It felt awkward and uncomfortable, but my teacher, being a strong, but gentle and encouraging man not quite my father’s age, had done a wonderful job establishing himself as someone we could trust – not just to teach us how to properly fend of danger, but to protect us. As a young and fragile woman, this meant everything to me at that time.

He was cautious but assuring when he told me that we would, but stopped to allow the others to pass us before asking why I would ask about something so specific. I told him the truth with all the gory details. His concern was my safety, and thankfully, I wasn’t currently seeing the man that laid his hands on me that way, but I explained it was the only time I really ever felt truly helpless and violated.

It wasn’t long before he had my classmates and I pinning each other to the walls and floors of the gym we had class in, and in no time at all and with every successful escape, I was reclaiming confidence. I was stronger, physically and emotionally.

Spiritually, though, I was weak. The foundation I stood on was my own and after a while, it faltered. I returned to the relationship I fought so hard to leave behind me, and we were together for quite some time after that. I thank the Lord that the physical abuse we inflicted on each other was over for the most part, though the emotional abuse and betrayal continued. He cheated, and eventually, so did I.

It was more than two years later that Christ called on me and I invited Him into my heart, and though it’s been nearly four years since then, I’m still learning that I don’t have to fear Jesus in the sense that He might hurt me or betray me. The Lord is to be feared, in that we view Him with awe and reverence, but not that we can’t approach Him with our hurt. And he’s proven Himself faithfully devoted to me time and time again, willing to assure me of His presence, grace, and love at every turn.

In time, in prayer and in studying His Word, I’ve come to understand that the way that I was treated – physically, emotionally, and spiritually – was abusive and not at all how a man is supposed to treat a woman in his care, and that the standards for a man are even higher when he is claiming to be a man of God.

We can be tender and sensitive, though incredible and capable creatures, ladies, and in my own experience, these are the things He has led me to that I came to expect from a man, reversing the mindset I developed after years of abuse:
1) He should speak truth to me in love. (Ephesians 4:15). If you need a definition of love, try the one in 1 Corinthians 13:4-7. He should speak to me patiently, kindly, without being jealous or arrogant, honorably and genuinely, even-tempered, or grudgingly. His words should seek to protect me, build trust between us, and foster hope.
2) He should love me, and I should be respectful toward him. (Ephesians 5:22-23). Though infamous among secular and feminist crowds, this scripture opened my eyes to something incredible: men needed a command to love, and women needed a command to be respectful. We are not innately these ways and our commands are different, which points to our creative differences as men and women. But it bolstered and supported my need to be loved. “As Christ loves the church…” the Bible says in verse 25. I don’t think this means just being willing to take a bullet for me, but rather to generally lay down himself for my sake and salvation – his pride, his manliness, his selfish ambitions and desires. Love is a sacrifice above all things; therefore he shouldn’t be unwilling to sacrifice for me.
3) He should be understanding and gentle with me. (1 Peter 3:7). We’re built differently physically and emotionally, and as a whole, ladies are weaker than men. I don’t think God makes less of me because of this, but rather that He thinks so highly of me that He took the time to command a man to honor me more highly and to treat me more preciously than he might have on his own because of it.
Ladies, it’s in the Book, the Living Word of God. God has set these standards before a man as a command. Every man will fall short of His glory, He’ll never love you and treat you the way Christ does – but if he’s laying his hands on you, sister, he is not a man of God. He has violated his commands, or in some cases, his own vows to love and protect you, and to honor you.
Please, get help. Get someone in your corner. Escape to safety. Allow yourself to be taken under the wings of God and seek refuge in Him. Let Him place your feet upon a rock and stabilize your life, and learn from Him what it means to be loved.